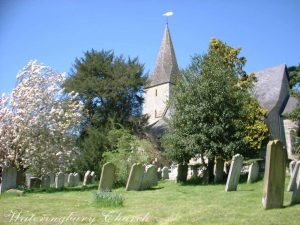 Wateringbury is one of a chain of Upper Medway Valley villages where the river is very much part of everday life. From Allington Lock, below Maidstone, to Tonbridge, the river is well used all summer by holiday cruisers and the riverside at Wateringbury is always lined with them.

For centuries, though, the village played a very muted second fiddle to the other settlements in the parish, one of which was Chart, a community that has now vanished virtually without trace.

It has been suggested that the houses at Chart may have been burned down at some time, possibly deliberately because of an epidemic that raged through them. However it was, the most we can say of Chart today, in the parish of Wateringbury, and that it was probably somewhere near the Pizien Well end – which is itself probably older than the present Wateringbury village – that it anciently held a charter for a weekly market and an annual three day fair, and that the rarest of Wateringbury’s historic relics originally belonged there: The Dumb Borsholder of Chart

The Dumb Borsholder is a three feet five inches long wooden staff fitted with metal rings and a wicked looking iron spike in one end. Its history reaches back to Saxon times, when it was customary for small communities to appoint an elder to be the borsholder and represent them at meetings of the Hundred Court. As time went by, the staff that originally symbolised the office that became known as the Dumb Borsholder for a year at a time, and was paid a penny by each of the other householders of his community to do so. The practice continued through the centuries until one Thomas Clampard, blacksmith, became the last holder of the office in about 1740.  He died in 1748 and was buried in Wateringbury churchyard, remembered with an epitaph shared with blacksmiths all over the country.

It was about that time too, that Wateringbury emerged as the chief village of the parish and took charge of the ancient relic which is thought to be the only one of its kind left in England.

Pizien Well is a road at the west end of the parish.  The name is not as ominous as it sounds, probably deriving from a family name – Peizen, perhaps – and the well that bubbles up there. The water is locally thought to have remarkable properties and until quite recently it was the custom for local newly-weds to go to drink its water in order to ensure they had healthy children. Perhaps the custom is carried on still, though, its doubtful whether a modern bride would admit it if she did nip out under cover of darkness and take a sip. Pizien Well Road was used in the filming of an episode of East Enders.

For much of the history of Wateringbury researchers are indebted to former Clerk of the Parish Edward Greensted who died in 1787 – or, as his memorial stone preferred to put it, ‘dropped like ripe fruit into its Mother’s lap’  It was he who left a very graphic account of a disastrous summer storm that swept across this part of Kent in August 1773.  It only lasted about half an hour, but in that time the wind rose to hurricane force, the thunder and lighting were almost continous and hailstones up to ten inches round battered trees,crops, houses and wildlife. According to Greensted some of the hailstones lay in heaps for more than a month and still measured four or five inches at the end of that time. They provided a tourist attraction while they lasted and some were sent as curios to be exhibited in London.

Wateringbury Place is a lovely Georgian house built by Thoms Style in 1707 to replace the older building. The property remained n the Style family until 1851 and then returned to it after a break, although it is now in other hands again.

The Style family became linked with the Winches in the Maidstone Brewery of Style and the old Phoenix Brewery at Wateringbury was closed on 1982 and given permission for redevelopment for housing in 1984. Its distinctive gold coloured weather vane lives on, although as a smaller copy of the original, which was lost when sent for repair many years agao.  The copy is now on The Wateringbury

As well as the Dumb Borsholder, Wateringbury used to boast about a paricularly fine and unusual sundial that stood on a plinth near the porch of the church for about a hundred years. It was about two hundred years old, the work of a local man, Thomas Crow, who was born in 1772.  It told the time all over the world accurately to within a couple of minutes, and was valued at about £600 at the time.  It was unscrewed from the plinth and stolen in 1981.  It has never been recovered. There is a new sundial in the churchyard in memory of Thomas Crow.